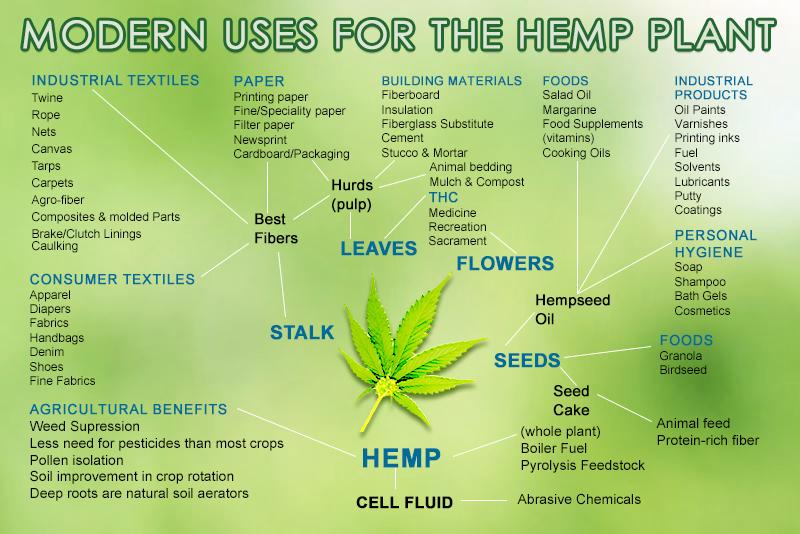 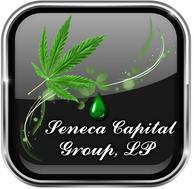 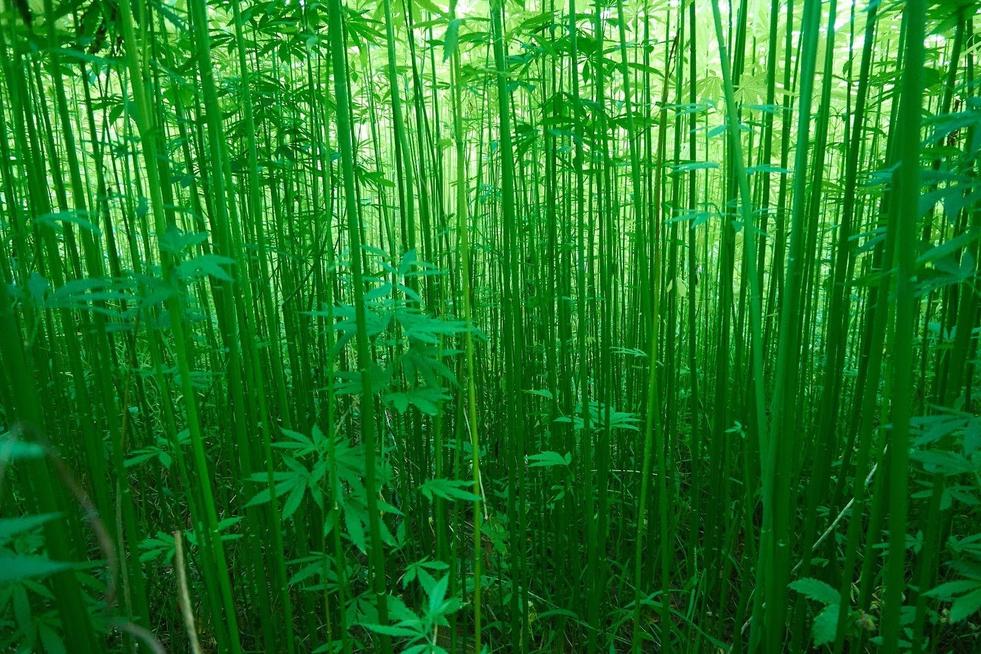 Hemp fiber, seed and oil can be used for a number of products.

Hemp juice
Hemp juice made from industrial hemp is a drug-free, non-psychoactive juice pressed with pressure from the Cannabis sativa plant. The juice is obtained through a large-scale industrial cold-pressing procedure using the upper parts of the hemp plant as well as the leaves. This procedure clearly distinguishes hemp juice from other hemp products such as hemp oil, hemp sprouts or hemp milk, which are solely obtained through the seeds of the hemp plant as opposed to the green hemp leaves used for the juice. The hemp juice production therefore makes use of a valuable part of the industrial hemp plant which has previously been neglected and not been used but instead been left on the fields to decompose. In particular, hemp juice offers a base for a variety of drug-free products in the areas of nutrition, medicine, cosmetics, and relaxing beverages. Moreover, its full-bodied umami flavor offers the ability to enhance dishes and drinks in their specific flavor, especially sweet or savory and harmonizes tastes overall.

Hemp milk
Hemp milk, or hemp seed milk, is a plant milk made from hemp seeds that are soaked and      ground in water. The result resembles milk in color, texture, and flavor. Hemp is conducive to being organicallygrown and labeled. Plain hemp milk may be sweetened or flavored.

Maltos-Cannabis
Maltos-Cannabis was a Swedish hemp seed-based malt beverage "food remedy" with sedative qualities produced beginning around the late 19th century into the early 20th century. The product was widely available in Sweden, Denmark, and Norway, and was advertised and reviewed in American publications. An 1899 pharmaceutical reference book printed in Philadelphia defined the product: "A Swedish nutrient in form of a yellowish-white powder, possessing a taste at first saline, later sweetish, and then acrid and bitter."

FRPs are commonly used in the aerospace, automotive, marine, and construction industries. They are commonly found in ballistic armor as well.

Hempcrete or Hempline is bio-composite material, a mixture of hemp hurds (shives) and lime (possibly including natural hydraulic lime, sand, pozzolans) used as a material for construction and insulation. It is marketed under names like Hempcrete, Canobiote, Canosmose, and Isochanvre. Hempcrete is easier to work with than traditional lime mixes    and acts as an insulator and moisture regulator. It lacks the brittleness of concrete and consequently does not need expansion joints. The result is a lightweight insulating materia ideal for most climates as it combines insulation and thermal mass.

Oakum
Oakum  is a preparation of tarred fibre used to seal gaps. Its main traditional applications were in shipbuilding, for caulking or packing the joints of timbers in wooden vessels and the deck planking of iron and steel ships; in plumbing, for sealing joints in cast iron pipe; and in log cabins for chinking. In ship caulking, it was forced between the seams using a hammer and a caulking iron, then sealed into place with hot pitch.

Cannabis (drug)
Cannabis, also known as marijuana among other names, is a psychoactive drug from the Cannabis plant used for medical or recreational purposes. The main psychoactive part of cannabis is tetrahydrocannabinol (THC), one of 483 known compounds in the plant, including at least 65 other cannabinoids. Cannabis can be used by smoking, vaporizing, within food, or as an extract.

Medical cannabis
Medical cannabis, or medical marijuana, is cannabis and cannabinoids that are prescribed by physicians for their patients. The use of cannabis as medicine has not been rigorously tested due to production and governmental restrictions, resulting in limited clinical research to define the safety and efficacy of using cannabis to treat diseases. Preliminary evidence suggests that cannabis can reduce nausea and vomiting during chemotherapy, improve appetite in people with HIV/AIDS, and reduce chronic pain and muscle spasms.

Hemp oil
Hemp oil or hempseed oil is obtained by pressing hemp seeds. Cold pressed, unrefined hemp oil is dark to clear light green in color, with a nutty flavor. The darker the color, the grassier the flavor. It should not be confused with hash oil, a tetrahydrocannabinol-containing oil made from the Cannabis flower, hailed by some for its medicinal qualities.

Can be used in biodiesel

Hemp hurds
Hemp hurds, also known as shives or hemp wood, are an agricultural product made from hemp. Hurds consist of "the woody inner portion of the hemp stalk, broken into pieces and separated from the fiber in the processes of breaking and scutching" and "correspond to the shives in flax, but are coarser and usually softer in texture". Hurds have traditionally been a by-product of fiber production.

Hemp jewelry
Hemp jewelry uses hemp twine material which is made from the Cannabis sativa plant, otherwise known as “Common Hemp”, which is cultivated to make goods such as food, fuel, clothing and textiles, cosmetics, paints, paper, building materials, and plastics, among others. Some types of hemp jewelry include bracelets, necklaces, anklets, rings, watches, masks, purses, and other adornments. The jewelry can also make use of other materials, such as glass, wood, bones, rocks, or gems.

Paper
Paper is a thin material produced by pressing together moist fibres of cellulose pulp derived from wood, rags or grasses, and drying them into flexible sheets. It is a versatile material with many uses, including writing, printing, packaging, cleaning, decorating, and a number of industrial and construction processes. Papers are essential in legal or non-legal documentation.